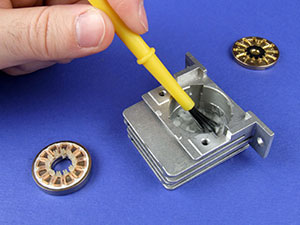 Master Bond EP21TCHT-1 is a two component, thixotropic paste formulated for bonding and sealing applications. This system has been used in various applications involving different substrates, service conditions and requirements. Multiple published research articles from University of Florida, Princeton University and NASA, among others make reference to the use of Master Bond EP21TCHT-1. This heat resistant epoxy is serviceable over the temperature range of 4K to +400°F and maintains its properties under cryogenic conditions. This room temperature curing compound is thermally conductive and electrically insulative. EP21TCHT-1 passes NASA low outgassing testing and is therefore recommended for use in vacuum environments. Below is a summary of the many ways EP21TCHT-1 has been effectively used in research labs and commercial applications.

*1 - Teflon needs to be chemically etched for epoxies to adhere to it.

University of Florida, wrote a study titled Stability Of Materials For Use In Space-Based Interferometric Missions.2 Among the topics discussed in this paper was the use of hydroxide bonding for the assembly of instrumentation for space based missions. A prototype telescope support structure for the Laser Interferometer Space Antenna (LISA) mission was constructed. After fabrication of the telescope was completed, it was found that a hydroxide bonded strut was tilted. A small amount of force was able to dislodge the strut following exposure to -70°C. In attempt to provide extra strength to the multiple struts in the structure, they tried sister-block bonding using an epoxy adhesive in conjunction with hydroxide bonding to adhere SiC to SiC for strut bonding.

After researching several different epoxy compounds, Master Bond EP21TCHT-1 was selected for the sister-block bonding application. It offered a combination of advantageous properties including:

Master Bond EP21TCHT-1 was cured for 2 days at room temperature and applied without any surface preparation. Shear strength tests showed significant improvement in results over hydroxide bonding and demonstrated the suitability of using EP21TCHT-1 for sister-block bonding.2